Institutional Diversity and Political Economy. The Ostroms and Beyond (Oxford University Press). 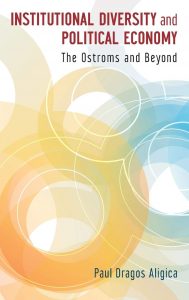 “It is a simply fantastic book. Paul Dragos Aligica brought together aspects of our work that I knew about but had not yet linked together in the way that he has. The overwhelming reaction I have had is that he has taken our work many steps into the future.”
–Elinor Ostrom, 2009 Nobel Prize Laureate in Economics

“This is an innovative and instructive treatment of a classic problem in political philosophy: the rational design of a benign institutional order. Its approach is rooted in epistemology by centralizing the question of how to best develop and deploy the information needed to realize this objective in the complex conditions that prevail in our day. In endorsing the polycentric contextualization of a pragmatic perspective, this insightful discussion infuses oxygen into a region that is all too often replete with hot air.”
–Nicholas Rescher, Distinguished University Professor of Philosophy, University of Pittsburg

“We are beset today by increasing skepticism of the viability and intelligence of democratic self-governance, raising doubts that traditional defenses fail to assuage. In this scholarly and important book, Paul Dragos Aligica shows how the Ostroms’ pathbreaking work points to a reconceptualization of democratic citizenship, tying it to an enlightening idea of problem solving through public entrepreneurs. Aligica articulates a compelling vision of the institutions of a diverse and intelligent open society.”
–Gerald Gaus, James. E. Rogers Professor of Philosophy, University of Arizona, Tucson

“Paul Dragos Aligica’s Public Entrepreneurship, Citizenship, and Self-Governance offers a whole persuasive theory of the social world that challenges the right/left spectrum by starting not with states or markets but with people who work through a range of institutions to shape the world. For those entrepreneurs, this book is full of practical wisdom about how to operate more effectively and wisely.”
–Peter Levine, Lincoln Filene Professor, Tisch College of Civic Life, Tufts University, Massachusetts 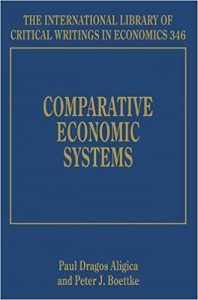 “The history books of economic thought are disturbingly incomplete, lacking a vast chapter covering the evolution of collectivist economic ideas and scholarly attempts at comparing the (dis)advantages of capitalist and communist systems. Any specialist or student eager to fill this gap is advised to read the Aligica-Boettke collection, particularly its subtext, carefully. The selection follows a thematic logic, but reading between the lines of thematic analysis the editors successfully present an authentic evolutionary pattern of Comparative Economic Systems.”
–Janos Matyas Kovacs, University of Vienna 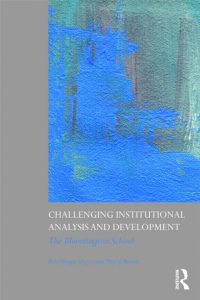 “This book is a marvelous piece of work on the nature of social sciences, the disciplinary boundaries between economics, political science and sociology, and the relationship between theory and practice in contemporary research.”
–Filippo Sabetti, McGill University

“Paul Aligica and Peter Boettke have done an outstanding job of describing the spirit and the reality of several decades of theoretical and empirical research on institutional analysis.  They have successfully captured how words express ideas and the language of human development.  Generations of future scholars will appreciate reading this book”
–Vincent Ostrom, Indiana University Bloomington
–Elinor Ostrom, Indiana University Bloomington, 2009 Nobel Prize Laureate in Economics